TEMPERAMENT: Why We Do Things The Way we Do.

There are “reasons” for everything we do as human beings, though it is often difficult for us to understand why we think like we think, feel like we feel, or act like we act in life. The concept ”Temperament” is actually and factually responsible for all of that. 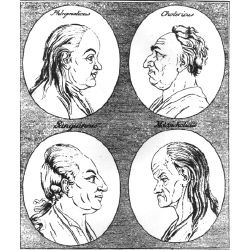 Temperament is a set of genetically determined psychic qualities a person possesses, which are determined by many factors, including brain chemistry and the central nervous system. It is an innate property of the psyche that a person can’t change. However, a person is often able to successfully conceal certain qualities of their temperament, while honing others. Nevertheless, in stressful situations, it is more likely that the innate qualities will appear and not the acquired ones.

THE FOUR BASIC TEMPERAMENT AND THEIR DIFFERENCES

CHOLERIC . Tall stature, thin build, long, narrow, flat chest. The forehead is wider than the lower part of the face and the chin is pointed. The nose is also pointed with a downward tip; it may be aquiline. Long neck, well-defined cheekbones.

MELANCHOLIC. Pointed features, frail physique, thin bones, weak muscles, a flat chest, a long thin neck, a high square forehead. The upper part of the face is much wider than the bottom.

CHOLERIC : Weakness of the digestive system (liver, gallbladder). Pulse is 75-85 beats per minute.

SANGUINE : Weakness of the cardiovascular system. Pulse is 65-75 beats per minute.

PHLEGMATIC : Weakness of the digestive system (stomach, intestines). Pulse is less than 65 beats per minute.

MELANCHOLIC: Weakness of the nervous system. Pulse is more than 85 beats per minute.

CHOLERIC : Quickly becomes close and emotionally attached to people. It is hard for them to break up.

SANGUINE . Rarely becomes quickly attached to people; easily replaces one person with another

PHLEGMATIC . It takes a long time for them to get close to people. However, once they become attached, it is hard to get people out of their life.

MELANCHOLIC: It takes a lot of time for them to get close to people; but they slowly become attached. It is hard for them to break up.

SANGUINE : Active, ambitious, superficial; an excellent organizer — the leader who loves recognition. The priority is money.

PHLEGMATIC : Inert, slow, serious, reliable, subordinate; they like to analyze, systematize. The priority is stability.

CHOLERIC : Quickly gets angry and irritated; openly expresses their emotions. Calms down quickly as well. Seeks to solve the problem.

PHLEGMATIC: Reflects on the causes of the problem. Ponders the decision for a long time, then executes it systematically.

MELANCHOLIC: Gets lost and panicked; looks for support and help. If they are not found, they often give up and spend a long time to worrying about it.

CHOLERIC : Needs popularity as they like when people are dependent on them. Goes ahead, risks, donates and sacrifices.

SANGUINE : Requires recognition because they love to be admired. They usually bypass the obstacles.

PHLEGMATIC : Seeks to maintain the current state of affairs. Gets rid of obstacles only if they interfere with their measured life; however, they do it effectively.

MELANCHOLIC: Needs recognition and emotional support for the sake of increasing their self-esteem. Often stops making efforts because they are afraid that they will not handle things well.

The knowledge of how different types of temperament react to the world and life situations can be highly useful. Comprehension of yourself and others facilitates and accelerates the achievement of internal (personality) and external (relationship) harmony.